Egon & Simon on an adventure!

Two amateurs taking the ONAK for a spin through Ghent city!

Simon and I recently did an internship at ONAK, and we thought it would be great to tell you guys the story of our first paddle.

To paddle you need … a canoe.

Unfolding the ONAK for the first time was quite the experience! Upon opening the ONAK case, one can only imagine how much thought Otto and Thomas, the inventors, have put into it. While I was working up a sweat – sidenote: it was surprisingly hot according to Belgian standards – my buddy Simon was sitting in the shadow of the nearest tree watching me follow the manual step by step. Seems rude, right? But of course he had his reasons: he had to take notes on my every move, in view of ironing out any of the manual’s potential flaws. I wish the roles were reversed, but since Simon had already assembled the canoe before, I was the only one without prior knowledge.

One of ONAK’s big selling points is that it only takes 10 minutes to transform the suitcase into a fully functioning two person canoe. My first solo assembly has been clocked – thanks for the hard work, Simon – at approximately 35 minutes. But I can imagine myself doing a lot better next time. As with a lot of things in life, I guess, practice is key!

To paddle you need … water.

Once we assembled the canoe, we carried it to the nearest water. Since the ONAK office is situated in an industrial area, finding a decent spot to go into the water was harder than we thought. Jumping in the canoe from a three foot high edge didn’t seem like a thing amateurs would accomplish without getting their clothes wet. So we continued. Eventually, we found a spot where we could reach the water. It was actually an area full of big rocks, but we didn’t feel like walking anymore and couldn’t wait any longer to have our first ONAK experience. In fact, to our knowledge, our first ever canoe experience!

Can you imagine working for ONAK for over a month, without ever having paddled with the product your daily work life revolves around? We felt a bit like little kids sitting in front of a huge chocolate cake, unable to reach it.

To paddle you apparently don’t need …

The first moment on the water was kind of stressy. We didn’t even know how to hold the paddles properly, let alone how to steer our canoe. On top of that, the first part of our canoe adventure was told to be the trickiest one, because we were in the middle of an industrial area with a lot of cargo ships. It was like learning to swim by getting thrown into the deep! We don’t know if it has to do with the ONAK or not, but we were surprised of how fast we got the hang of it.

After a good ten minutes, we were confident to take on our first big obstacle: crossing the Ringvaart.  But  then a cargo ship appeared. Looking back now, the waves probably weren’t that big. But believe you me: they seemed huge at the time! We honestly didn’t know what to expect. During our internship, Simon and I answered many emails from customers in which we reassured them that the ONAK is a fit for white water up to category 2 and even for open water, but there we were, anxious about our first little wave. The irony!

Obviously the waves weren’t a problem at all, they were actually quite fun! And from that moment on, we were feeling like pros. We joined a cute little marina and continued our way to our final destination: the Gravensteen castle. After approximately one hour of paddling, enjoying the sun, getting sprayed by a bunch of firefighters and waving to strangers, the historic city centre came into our sight.

How nice it was paddling through the city where both of us have been studying for years now. How nice it was showing off the ONAK to people passing by! We couldn’t help but feel proud that we were working for the company responsible for this foldable gem. Especially when we joined the Graslei, which is crowded by students when the sun is out.

The Gravensteencastle. What an amazing place to get back on land and end our 3 hour trip! It was too bad that we had to get back to the office in Zwijnaarde. But unfortunately, to every story comes an end. And to be totally honest, I didn’t see myself paddling back to the office for three more hours. That’s the beauty of an ONAK: you don’t need to worry about paddling back home again. You can just keep going one way, get out whenever you want and take, for example, the tram home. We folded the ONAK in approximately 5 minutes and were on our way. As easy as pie!

That concludes it for now. The main thing we learned from our trip – aside from canoeing – is that you don’t need to have any experience at all to take the ONAK out for a spin. So for those of you canoe virgins who have read this article until the end: just jump in a canoe, get to see your city from a different point of view and go with the flow. You’ll be amazed! 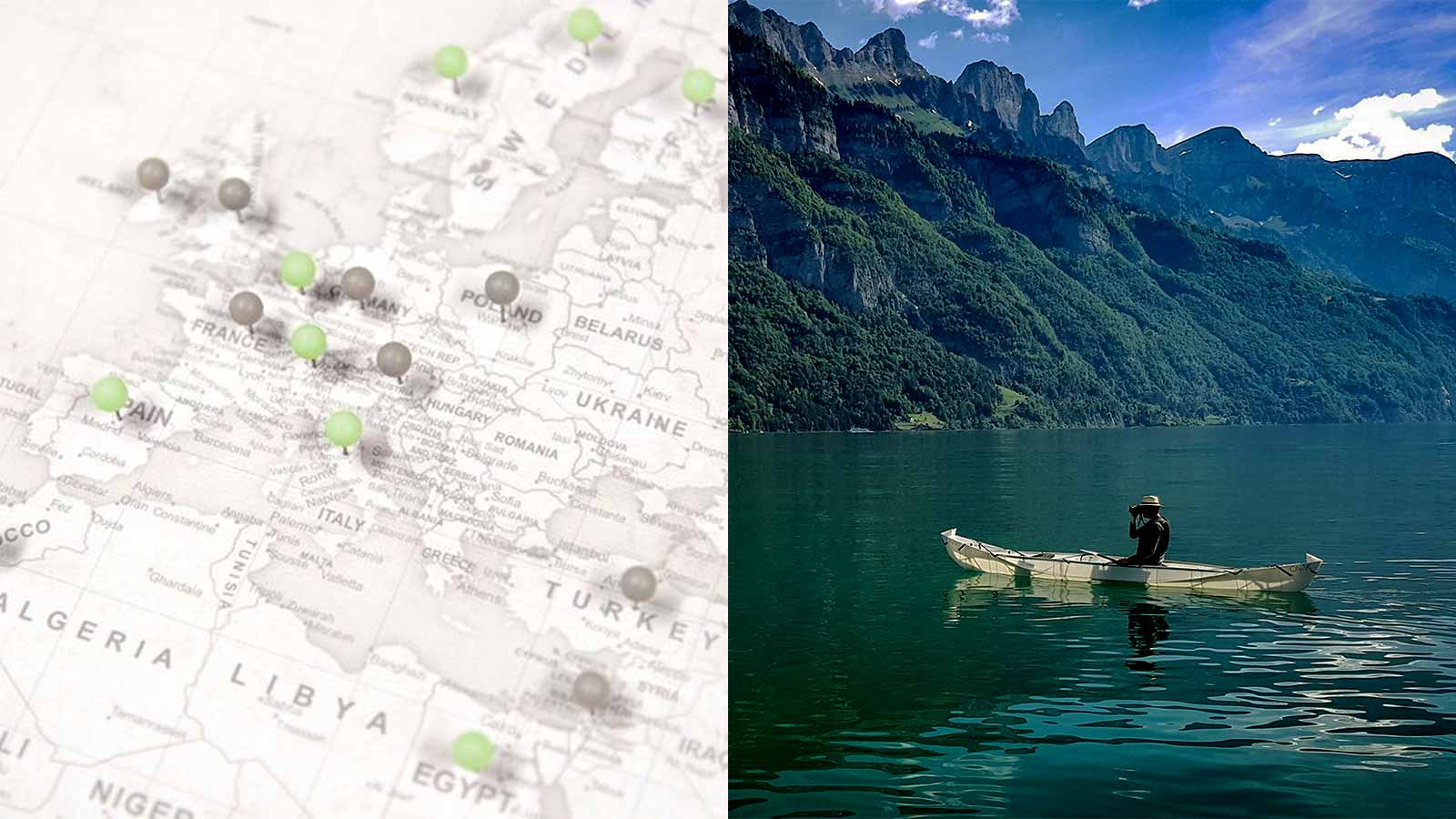